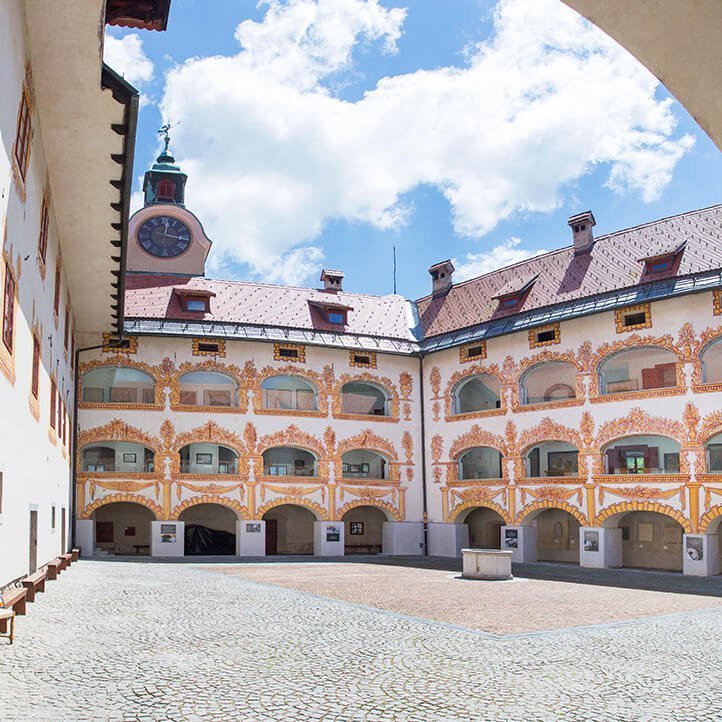 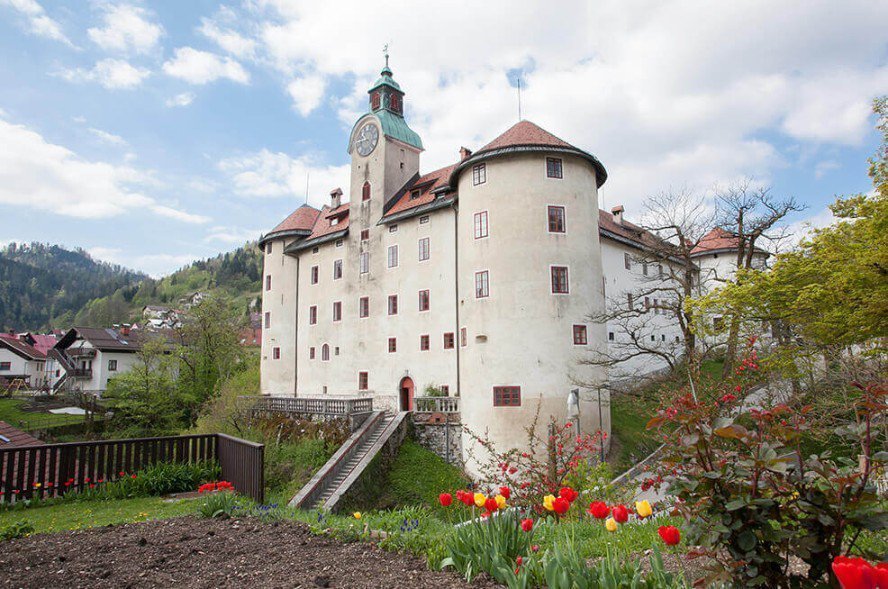 At the beginning of the 16th century, only a little over 30 years after the accidental discovery of a rich deposit of mercury, the mighty building of Gewerkenegg Castle gradually grew in the most strategically appropriate location. Its German name simply means “the mining castle”. It was built by the mine owners for defence against the Venetians and Turks, for the storage of mercury and foodstuffs, and the accommodation of the mine management.

Ore upon ore, a palace

The beginnings of the castle building go back to 1493 when the German miners built the wooden chapel of St Achatius shortly after their arrival in Idrija; the chapel was later included in the castle complex. The castle was built in several phases. The mine entrepreneurs initially walled and reinforced the chapel, followed by an extensive construction phase in 1522–1533. At the end of the construction, the Renaissance castle used external ditches for its defence, with three defensive towers, and the Nikova creek on the south side. The main entrance on the west side of the castle was allegedly fitted with a wooden drawbridge. The preserved stone “tooth” above today’s main entrance is a proof of that. The construction material used was, among other things, used clay vessels – retorts, in which mercury ore was burnt. The year 1527 is carved into the portal headstone at the top of the inner wooden staircase. It may be to mark the completion of a particular stage of construction, but more likely witnesses the date of issue of the authorisation for construction granted by the Emperor Ferdinand I. on 2 May 1527 to the private parties. 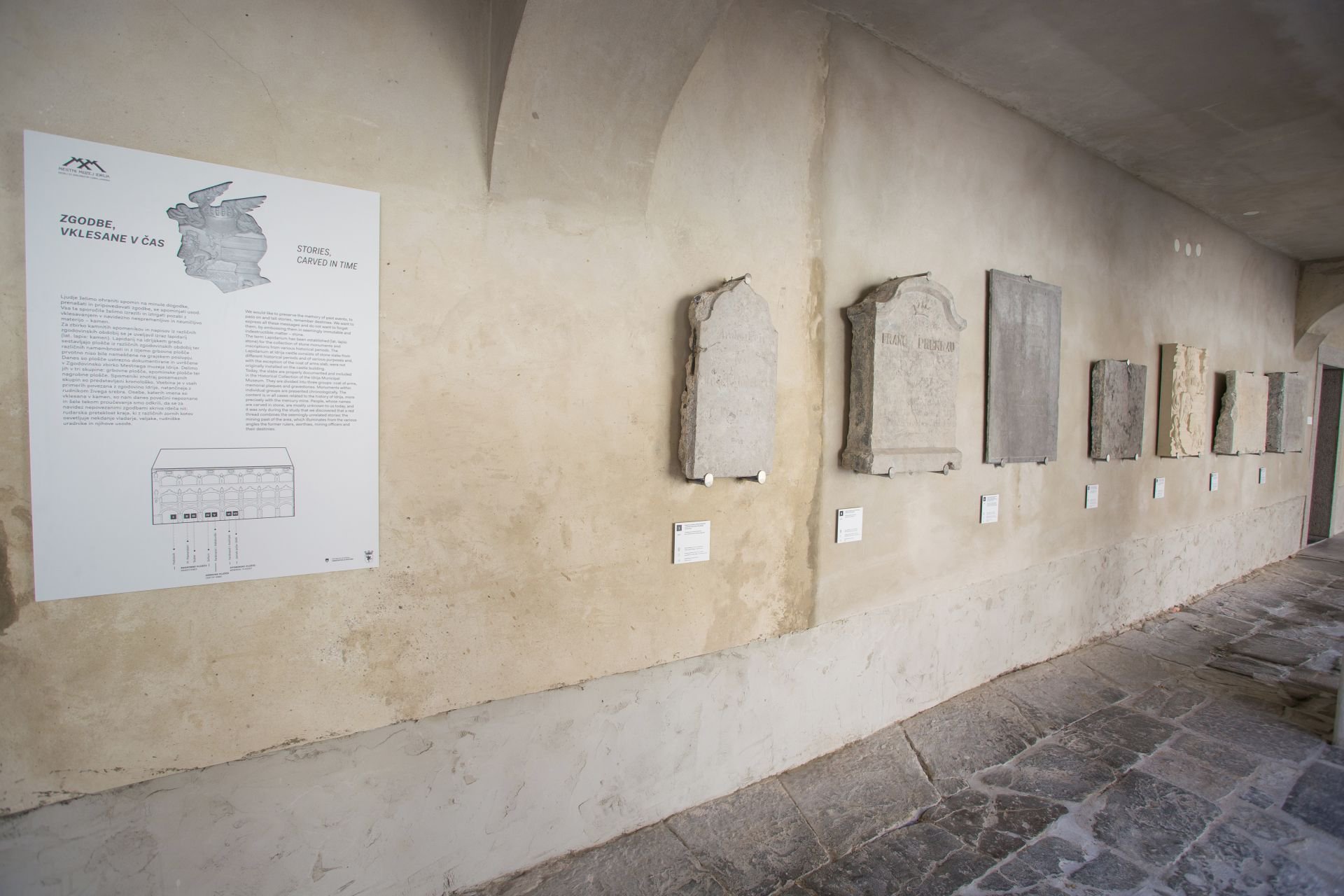 A smaller tower and a clock roof tower were built in the 17th century on the eastern facade of the castle, facing today’s city centre. It is not quite clear when exactly, but it can be seen on so far the oldest known image of the castle and the town, published in 1689 in The Glory of the Duchy of Carniola. In the last quarter of the 17th century, the old wooden foundations were replaced with the new, masonry ones, and a comfortable apartment for mine employees was built, and warehouses were arranged, where a two-year supply of grain was stored for all the mine workers.

A baroque renovation of the castle followed in the 18th century. The eastern façade with two towers on the sides was originally narrower and was only as wide as the arcade hallways, and the premises were expanded to the east supposedly in the middle of the 18th century. This is confirmed by the wall thickness and the year 1758 carved into the eastern external portal. At that time, the castle courtyard was renovated with semicircular arcades and baroque paintings were added. The works were probably completed at the time of the mining manager Anton Sartori, which is confirmed by the year 1758 in the fresco on the second floor of the castle. Who created the frescoes is not known, but stylised motifs and the choice of colours show similarity to surrounding rural frescoes. Maybe a famous Idrijan participated, a cartographer of the mine, an artist and a water barrier builder Jožef Mrak (1709–1786).

In the 19th century, baroque arcades were built in, baroque frescoes were repainted and two smaller utility extensions were added. In 1851, they completely stopped using St Achatius’ chapel and moved the altar to the chapel of John of Nepomuk below the castle. The 1824 Franciscan cadastre already notes a neat castle garden and accompanying economic facilities included in the castle’s premises.

The latest thorough castle renovation was between 1988 and 2017. Today, the castle yard reveals a view of open arcades with a paved hallway, a well and picturesque restored baroque frescoes, and the more attentive eye catches the details: the years carved above the portals of various style periods. The varied and international past of mining in Idrija is revealed in the “stone carved stories”, presented in the castle lapidarium.

Did the countesses ever walk along the castle hallways?

Besides the defensive needs, the resolution of mining entrepreneurs on the construction of the fortified castle also had economic reasons. And these are the reasons the Idrija Castle is a castle owned by several owners. We would probably easily meet a classy lady in the Idrija Castle hallways in the past – a spouse of a mine manager, but would hardly meet a sensitive countess as no noble family ever lived in Idrija Castle. A feudal lord was represented by a mine manager: a director with auxiliary specialist staff and administration personnel. The castle premises were intended for mine units, offices, a library and a mine manager and his family’s accommodation. There were warehouses, a castle prison and a barn in the ground floor and the basement. Despite all that, the castle inhabitants weren’t just anyone – they managed one of the most important companies in the empire, and the world’s largest mercury mine! Although no noble family ever lived there, Gewerkenegg Castle was an administrative, judicial, defensive and economic centre of the Idrija estate in the true sense of the word. 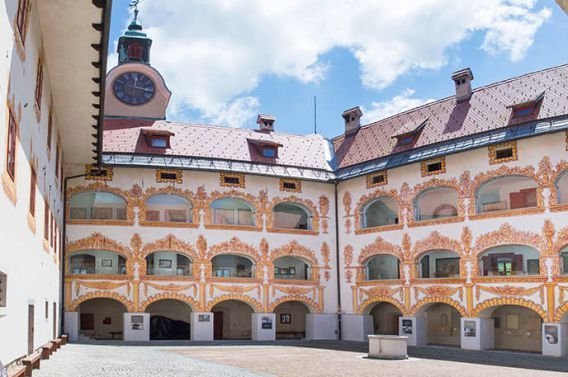 Somewhat special among castles, full of secrets! It was built in the 16th century for the needs of defence, mining administration and storage of mercury. The castle has a Renaissance shape, with an internal arcade courtyard with picturesque Baroque frescoes that are sure to impress you! Today it houses the Idrija Municipal Museum. The museum tells the 500-year-old story of the history of the mercury mine and the town of Idrija, giving an insight into the hard everyday life of the miners, embellished by the social and cultural life and the snow-white lace their wives and daughters made in the shelter of their home for extra income. Come and catch Mercury at the exhibitions:

More about the location

Five Centuries of the Mercury Mine and the Town of Idrija 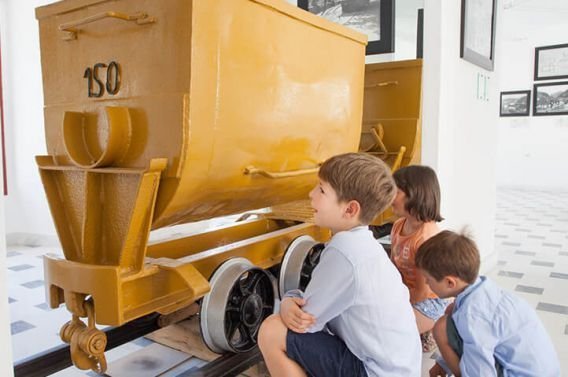 Target group:
Elementary school/1, 2, 3; Secondary school
Connection with the school curriculum: Heritage, museums, mining, history of the modern age, mercury, science, technique, UNESCO
Duration:
60min
Date and time:
Upon arrangement
Entrance fee
EUR 5.50/person
In addition to the entrance fee, groups of young people with fewer than 10 persons shall be charged a guiding service fee of EUR 35 per group. If you visit two museum premises, entrance to the third one is free of charge. The price list shall apply from 01/01/2019.
More about the programme
Announcement
+386 (0)5 37 26 600tajnistvo@muzej-idrija-cerkno.si

Milestones of the 20th Century 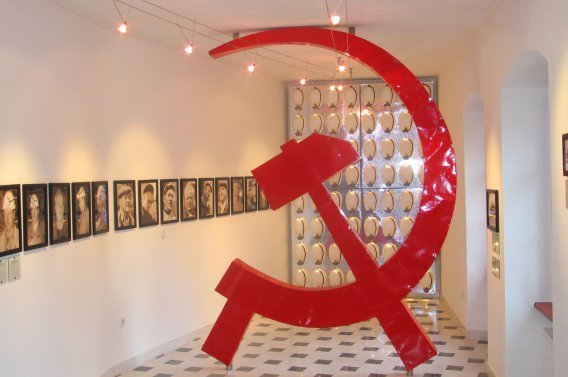 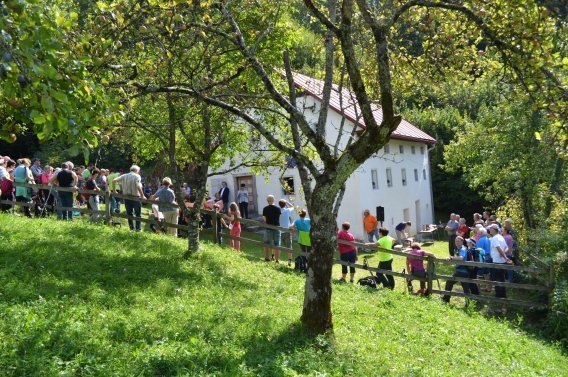 Target group:
Elementary school/1, 2, 3; Secondary school
Connection with the school curriculum: Slovenian writer France Bevk, life in the past and today
Duration:
45min
Date and time:
Upon arrangement
Entrance fee
EUR 3.00/person
More about the programme
Announcement
+386 (0)5 37 26 600tajnistvo@muzej-idrija-cerkno.si
All you need to know about planning a successful visit

The castle stands on the small hill above the town of Idrija and is visible from the central town square a 5-minute walk away. Climb up the stairs to the castle from the front side or continue along the road to the rear entrance. There are a few parking spots available for passenger cars. We recommend busses park at the bus station, around 10 minutes walk from the castle. 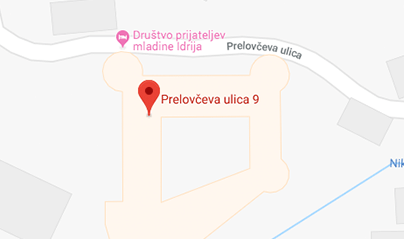 Opening hours
From October 1 till April 30: every day 10 am-5 pm, Monday closed
Contact
+386 (0)5 37 26 600tajnistvo@muzej-idrija-cerkno.si
Did you know?
The Idrija Municipal Museum keeps a heraldic panel from the first decades of the 16th century of Ferdinand I of Habsburg, the Austrian Archduke and later Emperor of the Holy Roman Empire. The heraldic panels with the castle owner’s coat of arms were something normal in the Middle Ages and in the beginning of the modern era. A reconstructed copy of the original is displayed in the castle lapidarium.