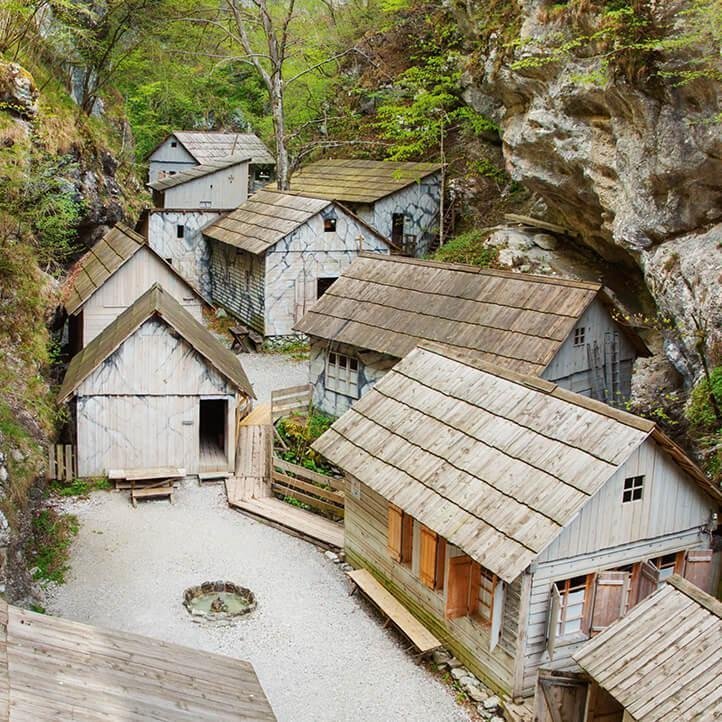 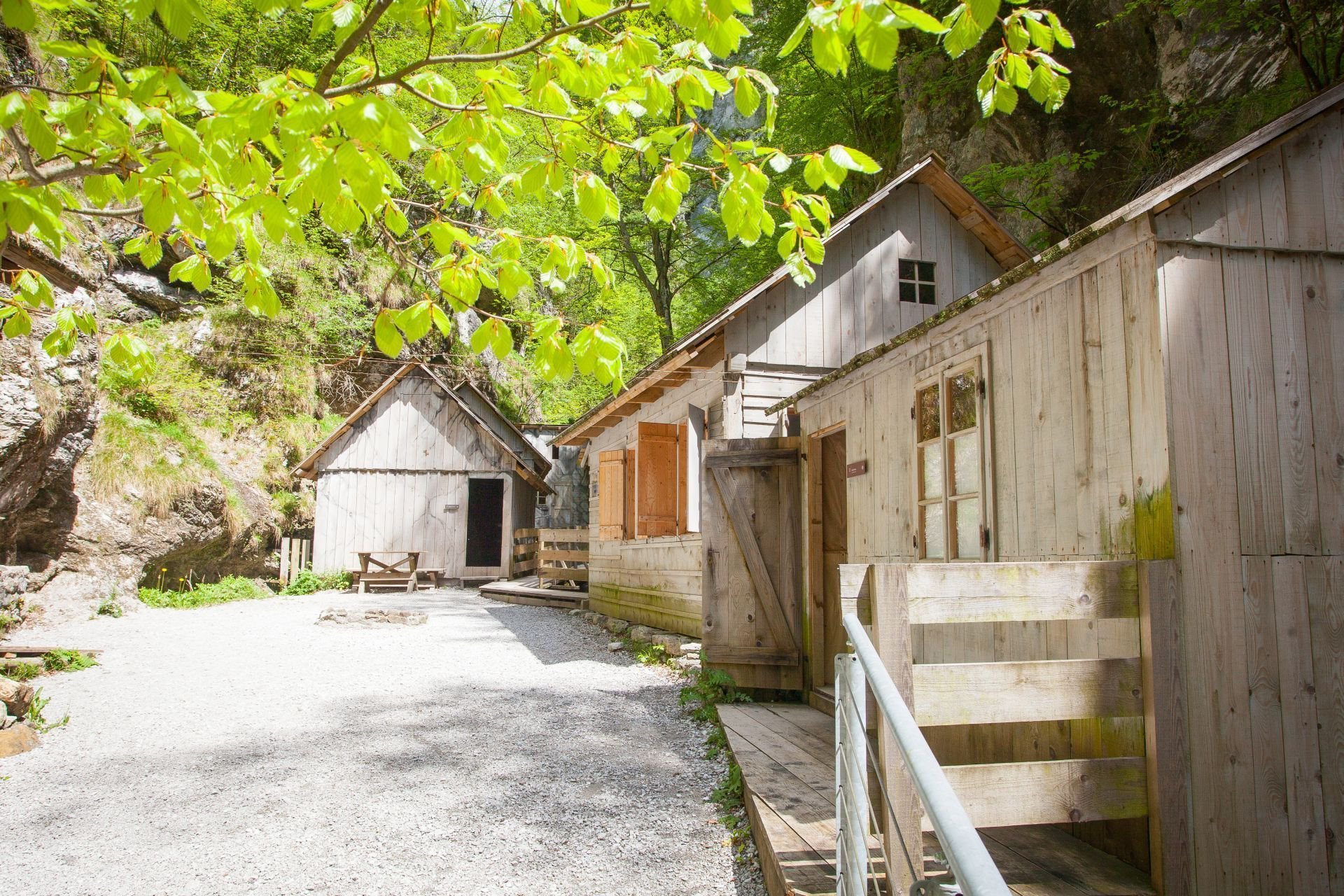 The strangest flower is in the black ravine...

Franja Partisan Hospital is a unique monument of humanity, companionship and solidarity from the Second World War. It operated as an illegal hospital in the difficult-to-access Pasica gorge in Dolenji Novaki near Cerkno between December 1943 and May 1945. It was led most of the time by Dr Franja Bojc Bidovec whom the hospital was named after during the war. Beside the staff, the locals also contributed to the successful operation of the hospital as they helped in building the huts, hiding the wounded in their homes and collecting food, medicines and other materials for them. Since the war, Franja Hospital has become a symbol of the Slovenian partisan healthcare and care of the wounded, helpless and those in need.

What is Franja and why is it Franja?

The Slovenian partisan army was aware of the importance and value of human life in the war, so it organised a medical service for the wounded comrades; it operated under special circumstances and involved over 800 doctors. The peak of the partisan medical services were illegal partisan hospitals. More than 15,000 patients were treated in over 120 Slovenian hospitals. Other resistance movements across Europe did not know such a health care organisation. Franja Partisan Hospital was one of the many illegal hospitals and one of the few preserved until today as a reminder and a monument. The place for building the hospital was shown to a partisan doctor Viktor Volčjak by a local Janez Peternelj. Volčjak and the locals started to build the first hut in late autumn 1943 and the first wounded were brought here on 23 December. Under the leadership of Dr Franja who came to the gorge in January 1944, they gradually built the hospital until the end of the war, by which time the hospital complex had 14 wooden buildings of different sizes and functions: huts for the wounded and the staff, an X-ray room, a warehouse, a home for the disabled, and even an electricity station. One of the most important tasks of the staff was concern for safety. They set up a perfect defence system with bunkers for the guards and shelters for the wounded. The only access to the hospital was through a creek running through the gorge. In spite of the fact that enemy soldiers came to the immediate vicinity twice, they didn’t find the hospital.

Mostly of the badly wounded were treated in the gorge, while less demanding injuries were treated in several auxiliary departments built in the near and distant area. A total of approximately 900 individuals were treated in all of them together. There were members of the partisan movement as well as individual fighters of the enemy forces. There were almost 100 foreign nationality soldiers, mostly Italians, people of the former Yugoslavia republics (Serbs, Croats, Bosnians, Montenegrins…) and the Soviet Union (Russians, Azerbaijanis…), French and two each of Austrians, Poles and Americans – one of them was the pilot of a shot-down plane. Let’s mention Dr Vladislav Klein from the south of Serbia by birth, who also led the hospital for a short time, and the Italian Dr Antonio Cicarelli, who led one of the hospital’s external departments. Despite the exceptional situation, medical care was at a high level. Qualified expert surgeons performed the surgeries, while the assistance of the civilian population was crucial in regularly supplying the hospital with medicine, medical supplies and food.

‘ The illegal hospital in the Pasica gorge and its departments are known as Franja Partisan Hospital. It was named after the warden who led the hospital the longest, Dr Franja Bojc Bidovec. It was officially called the Slovenian Military Partisan Hospital Franja at the time of operating. 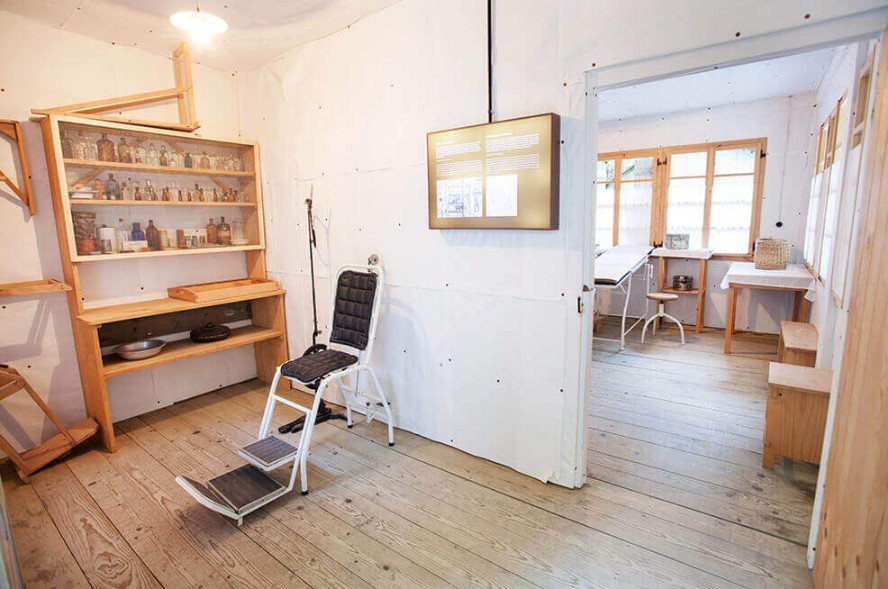 Franja Hospital – a reminder and a monument

When the staff and the wounded left the gorge on 5 May 1945, there was only a guard left. During operation a doctor and a short-time manager of Franja Hospital, Dr Franc Podkoritnik – “Dad” expressed the desire that after the war, the hospital “must be preserved as visible evidence to all future generations showing what a love for freedom is capable of producing and is producing”. In May 1946, Franja was officially opened to visitors, and protected as a monument in 1952. When flooding almost completely destroyed it in 2007, the Government of the Republic of Slovenia adopted a decision on its complete reconstruction. The basis was neatly filed documentation of the movable and immovable heritage, managed – in cooperation with other professional services – by the Idrija Municipal Museum, which has been managing the area since 1963. Solidarity once again brought together a number of experts, institutions and individuals who contributed the knowledge as well as material and financial means so that Franja could be re-opened to visitors in June 2010.

In 2015, Franja Partisan Hospital was awarded the European Heritage Label. This ranks it among areas with an important part of the common European history and culture. The symbol the values of which — humanity, solidarity, tolerance, integration and intercultural dialogue — are the peak of today’s united Europe value system, has even more underlined the symbolic importance of the region. On the one hand, it has contributed to an increased awareness of the European dimension of our area and, on the other, to its increased visibility. The museum is systematically reinforcing awareness of our common European history among various groups by preparing programmes, such as learning classes, guided tours, lectures, exhibitions and concerts, paying special attention to the young. A special programme called Education for Peace presents Franja Hospital as a memorial with an exceptional value of sending out a message. 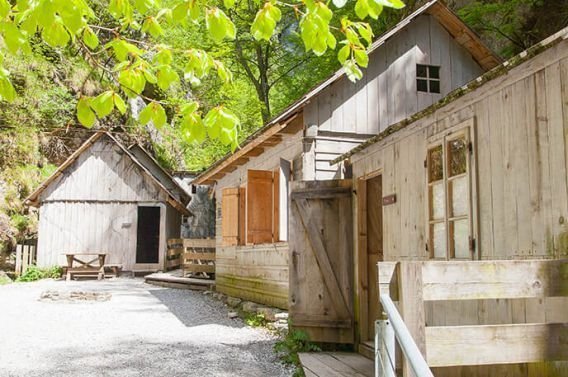 Duration:
1h 30min
Entrance fee
EUR 7.50/person
We only organise guided tours for scheduled groups.
There is a walk of approximately 10 minutes from the carpark to the gorge. We recommend you wear suitable footwear (trainers, hiking shoes). This trail is not advised for persons with physical disabilities.

A hospital hiding behind the name of the doctor and manager Dr Franja Bojc Bidovec was established in World War II in the wild Pasica gorge. Between December 1943 and May 1945, it ensured care and shelter to 578 wounded of various nationalities. The hospital – museum with a major communication value for us and future generations – that even the 2007 flood couldn’t destroy. It is a symbol of resistance, courage and kindness in times of difficult experiences. Franja is all this and much more – since 2015 a holder of the European Heritage Label! 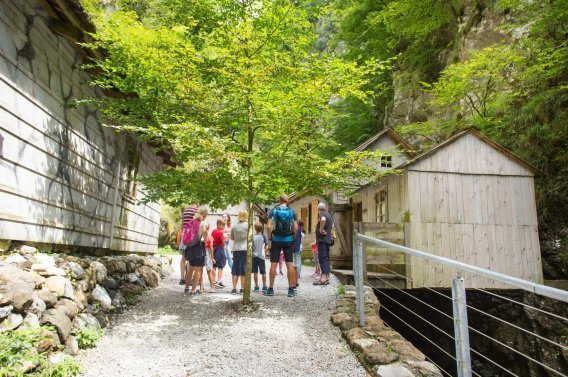 Target group:
Elementary school/1, 2, 3; Secondary school
Connection with the school curriculum: Modern history (Second World War), Europe's history, resistance movements, history of healthcare
Duration:
60min
Date and time:
Upon arrangement
Entrance fee
EUR 5.50/person
In addition to the entrance fee, groups of young people with fewer than 10 persons shall be charged a guiding service fee of EUR 35 per group. If you visit two museum premises, entrance to the third one is free of charge. Card services are not enabled. The price list shall apply from 01/01/2019.
More about the programme
Announcement
+386 (0)5 37 23 180info@muzej-idrija-cerkno.si
All you need to know about planning a successful visit

It takes about 10 minutes to walk from the carpark to the Pasica gorge. There is an access trail along the creek, on stairs and wooden bridges. There are explanatory boards along the way. The visits are individual while we organise guided tours only for scheduled groups for an additional payment. The tour with a guide takes about 1h 30min. The highest number of visitors per group is 50 persons. Your four-legged friends are welcome here too, but please keep them on a leash.
Starting point:
Franja Partisan Hospital, Dolenji Novaki
Directions

This trail is not advised for persons with physical disabilities. We recommend you wear suitable footwear (trainers, hiking shoes).

Contact
+386 (0)5 37 23 180info@muzej-idrija-cerkno.si
Basic information
Franja Partisan Hospital
Dolenji Novaki pri Cerknem, Cerkno
Tour:
It takes about 10 minutes to walk from the carpark to the Pasica gorge. There is an access trail along the creek, on stairs and wooden bridges. There are explanatory boards along the way. The visits are individual while we organise guided tours only for scheduled groups for an additional payment. The tour with a guide takes about 1h 30min. The highest number of visitors per group is 50 persons. Your four-legged friends are welcome here too, but please keep them on a leash.
Starting point:
Franja Partisan Hospital, Dolenji Novaki
Directions 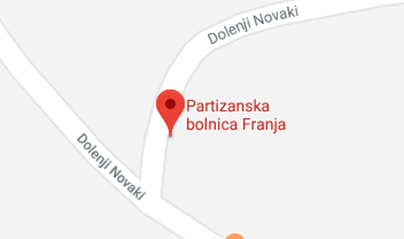 Opening hours
From November 7 to March 31: for booked groups, subject to favourable weather conditions
Contact
+386 (0)5 37 23 180info@muzej-idrija-cerkno.si
Did you know?
There was an internal hospital newsletter called The Medical Chart (Bolniški list). Songs, stories, experience descriptions, drawings, etc. created both by the wounded and disabled people, and the staff were published in it. 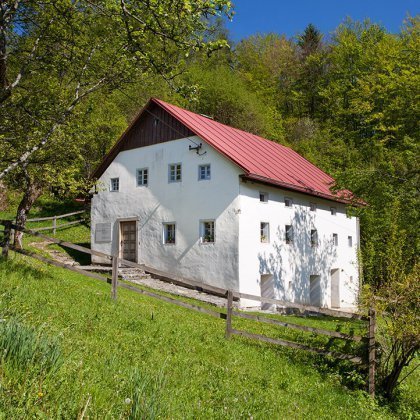